Opals are beautiful gemstones that slowly form as water carries and deposits compounds throughout the earth. This process takes a long time — like, a really long time. One centimeter of opal takes more than 5 million years to develop!

Like other gemstones, opals are pretty rare. There’s a huge variety of opals on the planet, but most are so rare that people will spend hundreds if not thousands of dollars just to own small pieces. Bigger opals sell for even more.

Beyond their impressive price tags, opals can be really beautiful. The Virgin Rainbow opal is a large, multi-colored stunner that literally glows in the dark.

Experts measure opals using carats, which basically refers to how much they weigh. Next, they look at things like the quality of the gemstone and the rarity of its color. With those factors in mind, the opal gets a price tag.

Just how pricey can these gemstones get? Find out with this top 10 list! 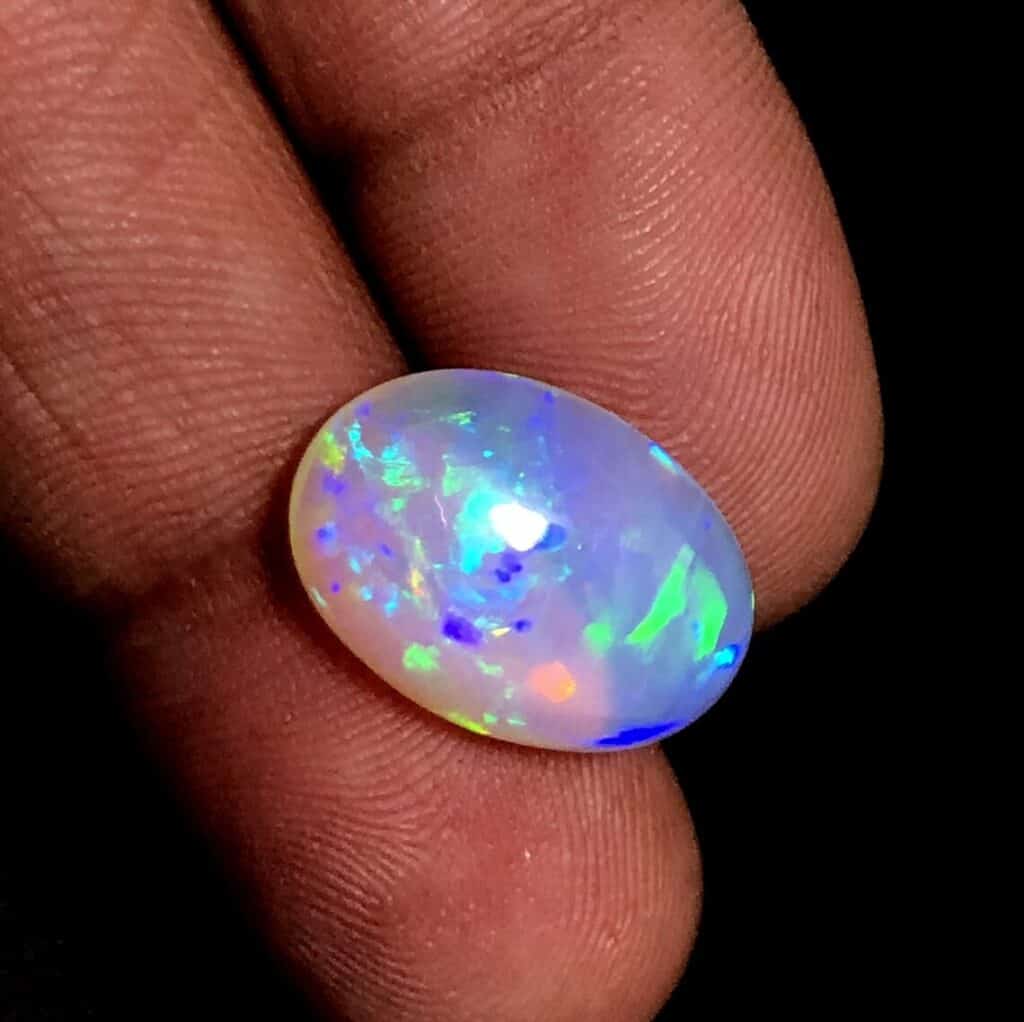 First up are rainbow opals — stunning, multicolored gemstones that are super eye-catching.

Opal prices can vary a lot. Rare discoveries like the Virgin Rainbow are almost priceless, but others are pretty cheap. Size plays a big role here. In many cases, smaller opals are cheaper. In this list, we’ll compare prices per carat. In the case of rainbow opals, one carat can cost you anywhere from $10 to $1,000. It’s a pretty big range.

So what are rainbow opals used for? Like other gemstones, these beauties are popular in jewelry — but they’re also used for spiritual practices.

Rainbow opals are found in many parts of the world. The Virgin Rainbow was found in Australia, but some American opal mines dig up these gemstones too. 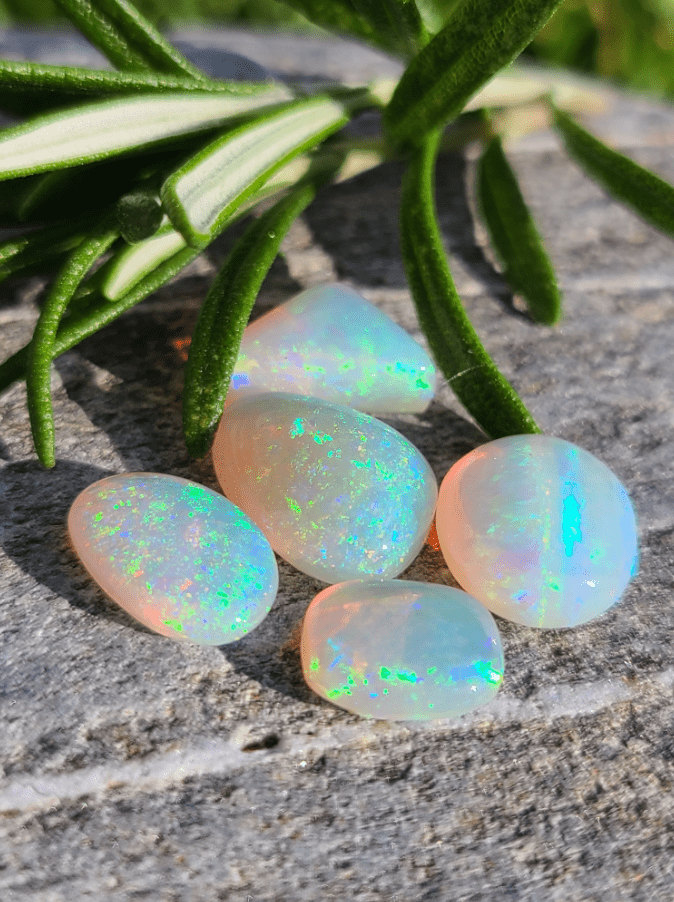 Brazilian opals are incredibly rare for a couple of reasons. First, many Brazilian mines have already dug up all the available stones. Second, opal mining hasn’t been launched at a large scale in the country. As a result, tracking down Brazilian opals is pretty difficult and expensive. Prices depend on a lot of factors, but you could easily spend $200 per carat on these precious stones.

If you do find an opal from Brazil, there’s a good chance it would make a nice ring. Brazilian opals contain less water content than other varieties, which makes them very durable. This allows jewelers to cut them like they would diamonds, making Brazilian opals a popular choice for jewelry.

Brazilian opals are found in a wide variety of colors. Some feature multiple shades, similar to rainbow opals, while others are “milky,” meaning whitish. 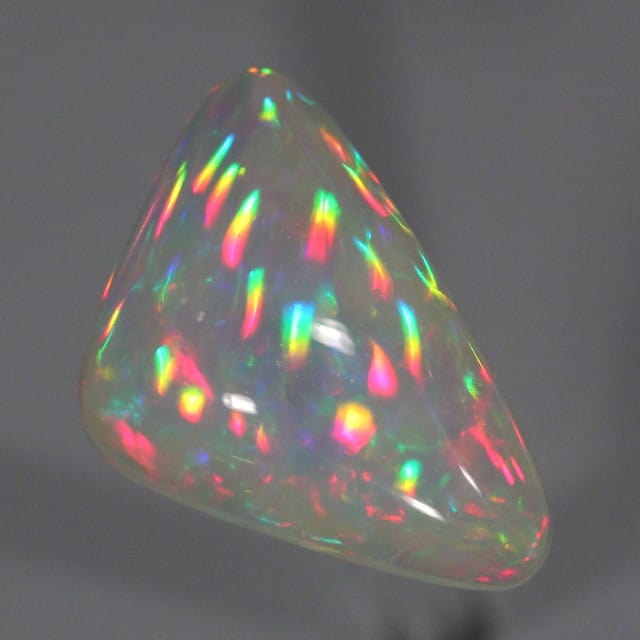 Opals are typically found in jewelry, but they’re also used in other decorative creations. Some artists incorporate opals in their ceramics, while others may use these expensive stones in mosaic designs.

Some opals are turned into powders and used as abrasives to smooth other materials, including higher-quality opals. 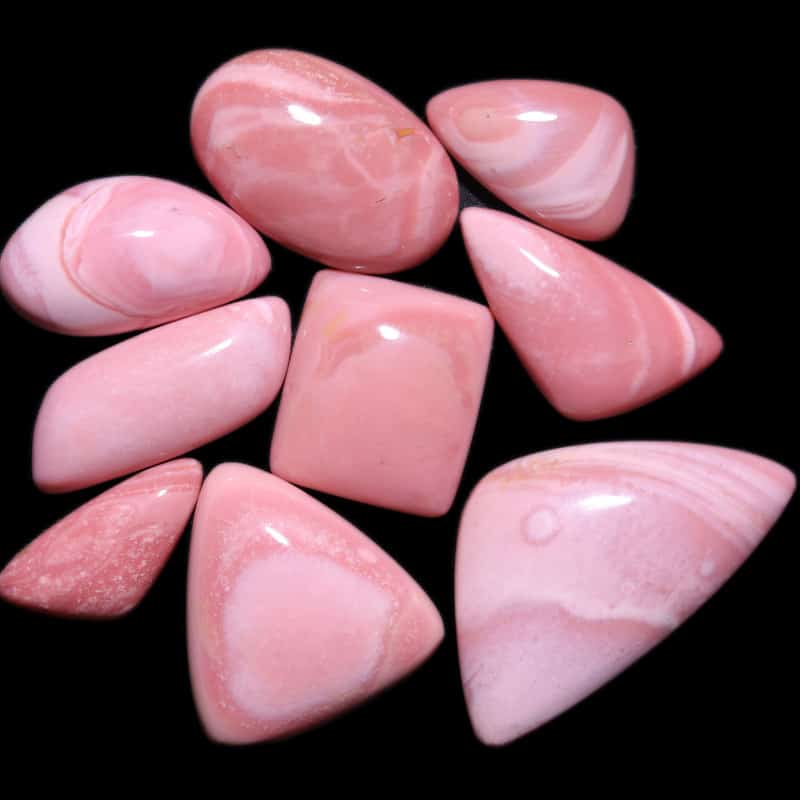 Opals from Peru are a category of their own, but many pink opals come from the South American nation. Known as Peruvian pink opals, these gemstones represent some of the most saturated pink opals on the planet.

Beyond Peru, pink opals are commonly found in Australia and Mexico.

Historically, pink opals have been used by indigenous communities throughout the Americas for various spiritual and sacred practices according to Opal Auctions.

Opals are considered softer gemstones. That means they tend to crack easier than things like diamonds. Experts recommend carefully caring for opals to avoid damage over time.

Estimated Value: Up to $300 per carat
Alternate Name: Andean opal
Common Origin: Lima (the capital of Peru)
Common Use: Jewelry 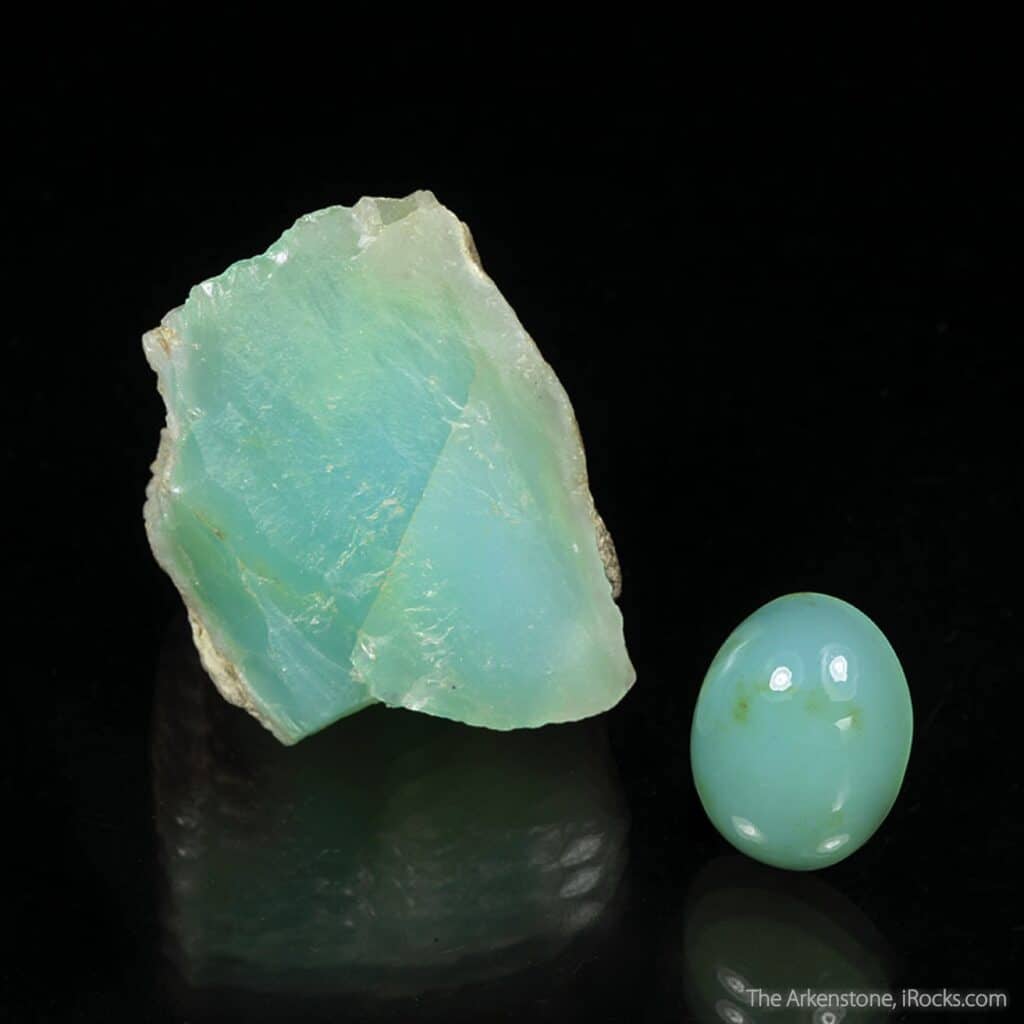 Most opals you’ll find for sale are smooth and rounded — but that’s not how they naturally look. These stones are rough and jagged when they’re pulled from the earth, just like other gemstones. Experts cut and smooth the stones with various tools before adding them to jewelry and other decorative objects.

Peruvian opal is no exception. The rare stone is gradually shaped, letting its natural colors shine.

Peruvian opals can be found in a range of colors, but greenish-blue stones are a hallmark of the nation’s opal supply. These gemstones are called Andean opals, referring to the Andes mountains where the stones are found.

At about $300 per carat, Peruvian opals are among the most expensive opals you can buy.

Andean opals were discovered by modern-day miners in the 1970s. 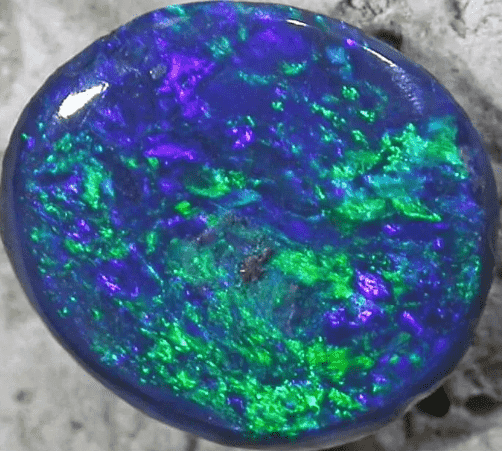 Blue opals are rare, but they can be found across the globe. Nevada, Peru, and Australia are all home to these stunning gemstones.

Blue opals might be found all around the world, but that doesn’t mean they’re cheap. These pricey gemstones can easily cost $300 per carat.

According to Anjie Cho, an architect and author, opals can be used in feng shui practices of ancient China. In particular, Cho says blue opal “is beneficial for enhancing communication and learning to speak out more boldly and freely” according to the practice.

Australia is the world’s largest producer of opals, providing about 95% of the world’s supply. 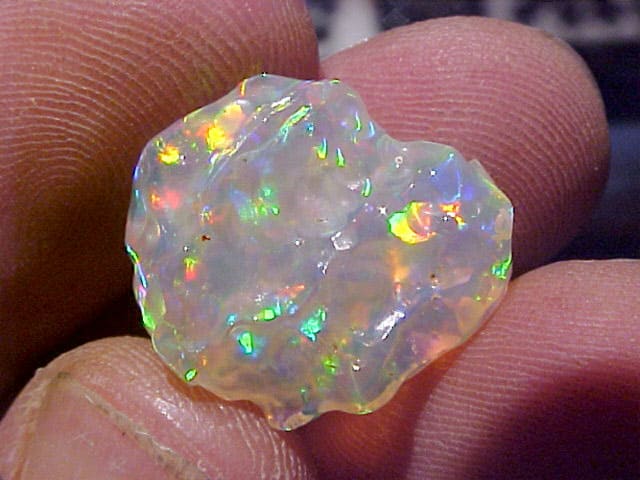 According to the Gemological Institute of America, Aztecs called opals quetza litzle pyolitli, which may translate to “stone which changes color in movement.” Another Aztec description of opals translates to “stone like a bird of a thousand colors.”

Like Peruvian opals, Mexican opals can be found in a wide range of colors.

Today, Mexican opals are popular for their eye-catching shimmer and brilliance. The rare gemstone can fetch up to about $500 per carat, making it the fourth-most expensive opal variety on the planet. 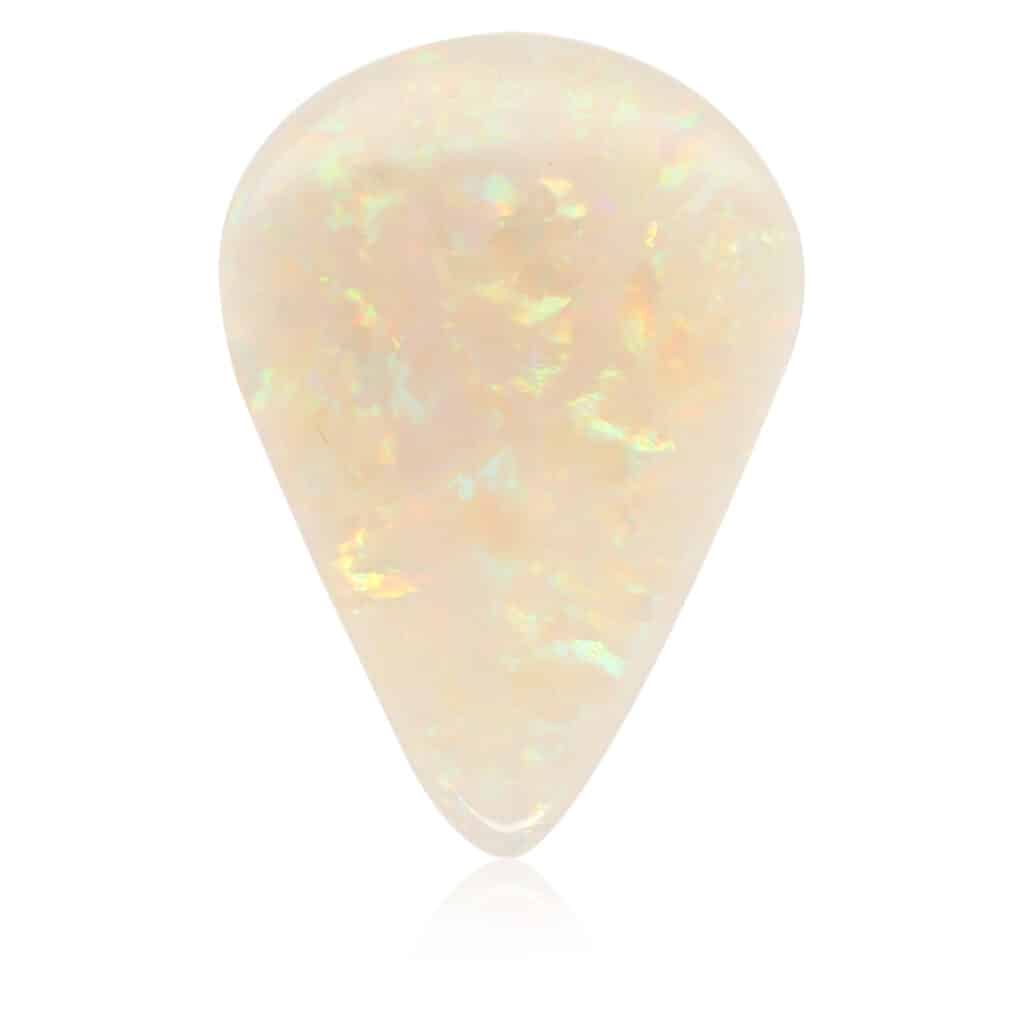 Heading into the top three we’ve got white opals — these stones are expensive. Prices vary, but you could easily spend up to $6,000 per carat to get your hands on these beauties.

A lot of opals come from Australia, but white opals are especially common in the nation. Opals Down Under, an Australian opal company, says the gemstones are found in Coober Pedy, Andamooka, and Mintabie — three major “opal fields.” Coober Pedy in particular has a lot of white opals, producing the majority of the world’s supply.

Opals were discovered in Coober Pedy in 1915 by a teenage boy. 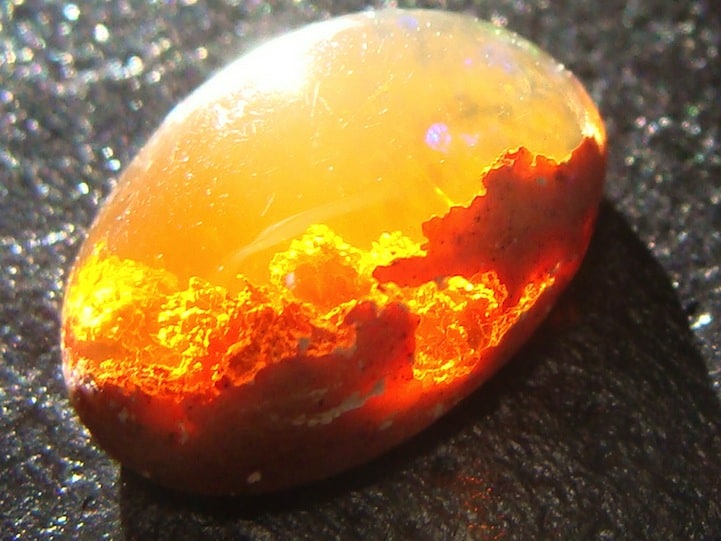 Coming in at number two are fire opals — glowing, colorful gemstones that look a bit like flames. The variety is found in a range of shades, from orange to red, yellow, and more. The fiery stones are formed inside ancient volcanoes as water and lava interact, turning a few boring compounds into stunning gems.

How pricey are these stones? Try $10,000 per carat. Prices depend on a lot of factors, but you’ll need a few grand to purchase these beautiful objects.

Fire opals are regularly found in Mexico. Mexican opals are often fiery, but not all gemstones found in the country fall under the “fire” category. Experts define fire opals as opals “that produce a dominant reddish-orange spectrum upon light reflection.” 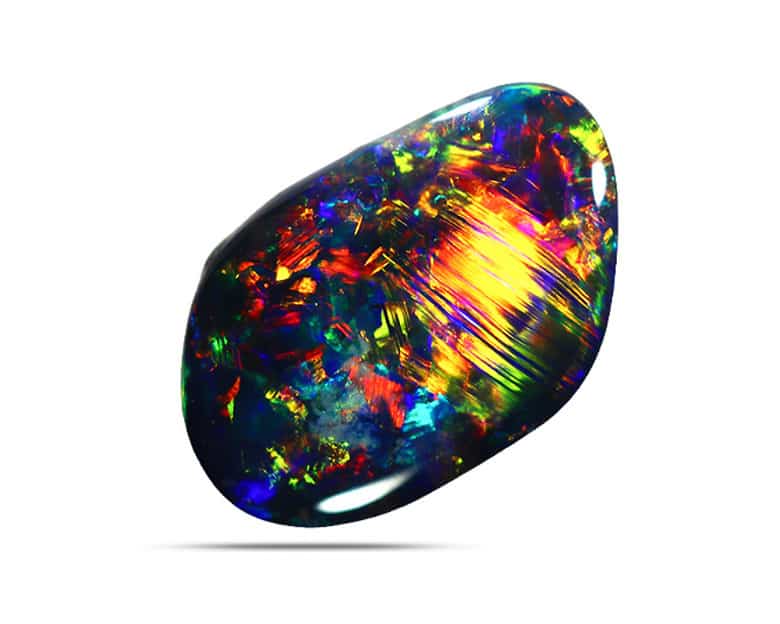 Black opals are the most expensive opals on the planet.

Believe it or not, black opals aren’t totally black. Instead, the name refers to the stone’s “dark body tone which can range from dark grey to jet black.” A black opal’s body tone is highlighted by beautiful touches of bright colors, making this variety the most popular and most expensive opal on the market.

Overall, be ready to spend $10,000 per carat for this pricey opal variety!

The dark body tone of a black opal helps rainbow highlights stand out. Opals Down Under says the gemstones would be less valuable if they were entirely black.