When Pokémon video games started one of the most successful franchises in 1996, it didn’t take long for The Pokémon Trading Cards to be published. With over 908 Pokémon species currently in the game, Trading Cards gained popularity steadily over the years. The game earned the title of one of the highest-selling trading card games of all time.

One of the most iconic characters in the franchise is Charizard, the final evolution of Charmander, a dual-type Pokémon dragon that can spit fire and fly, introduced in the First Generation. Charizard gained popularity due to its outstanding skills and being the cover mascot of the original Pokémon Red video game from 1996.

While collectors have scavenged for rare Pokémon cards ever since their release almost thirty years ago, Trading Cards’ popularity explored in the last couple of years. Many Pokémon cards are considered a great value today, but this list covers some of the most valuable and rarest Charizard playing cards you would be lucky to find in your attic. 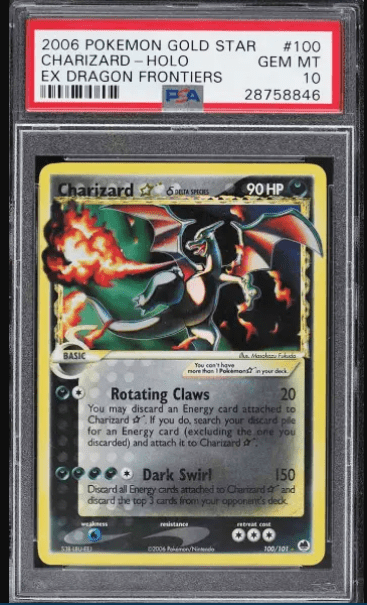 Designed by Masakazu Fukuda, Gold Star Pokémon cards depict the shining, alternative color variant of Pokémon cards that were not printed as much as the other trading cards. These Gold Star cards have a gold foil over the picture. The pull rate of the gold collectibles is only one per every two boxes.

Charizard cards have a shiny, holographic layer, with only 68 cards printed in Japan and 101 printed in the English expansion. One of those rare valuables sold for $25,400 at an auction by PWCC Auctions in 2021, graded by Professional Sports Authenticator (PSA) GEM 10, Mint condition.

The most valuable Gold Star cards are the Japanese versions of Eevee evolution cards, which were given as prize cards to the members of the Pokémon Players Club. 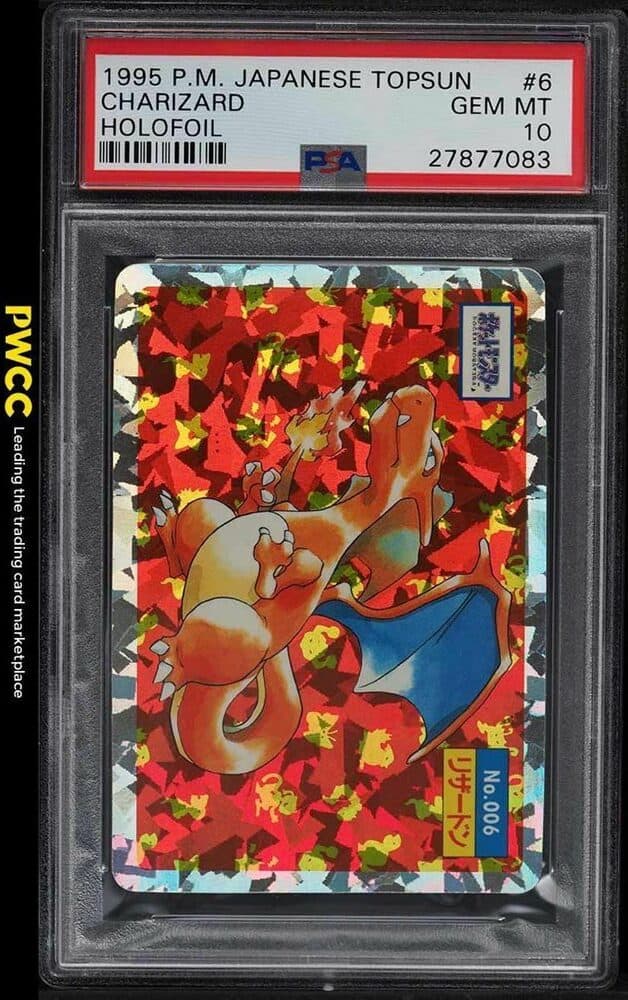 Topsun cards were bonus cards included with chewing gums, trademarked to be made in 1995. But some believe that they haven’t started distributing them until 1997, after the official Pokémon Trading Card Game started production a year earlier.

Holofoil Charizard card with the number 6 sold for $37,600 at an auction on eBay in 2020. This card gets its value from a different image of Charizard and holofoil on its face, missing other characteristics of usual Pokémon cards. These cards are nowadays only collectibles.

Topsun cards were produced by a Japanese candy company Top Seika. There are estimates that not many cards are easy to find today, and Blue Back Topsun cards hold a higher value than Green Back cards printed after. 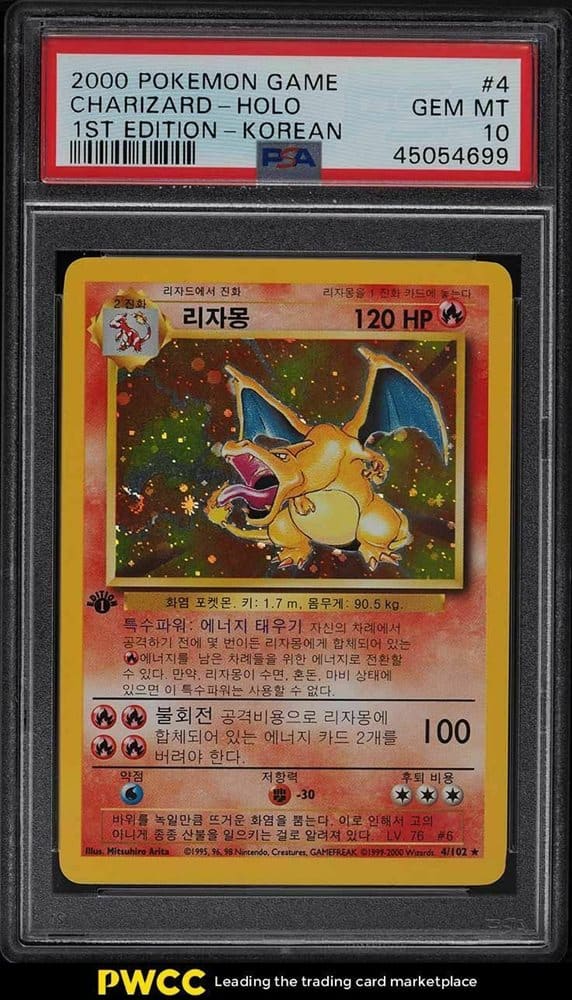 When Wizards of the Coast started publishing Pokémon Trading Cards, they also released many editions in different languages, while the Korean version debuted a year later, in 2000. It does not have the same value as some other’s foreign cards, but it is still one of the most remarkable collectibles.

Since this Charizard card is the first edition on the Korean market, one sold for $40,000 on an eBay auction in 2021. It’s another holographic card with a PSA grade of 10, meaning it’s in mint condition, without scratches or tears. The value of these cards in Korea is around $500 overall.

There aren’t many differences between English, Japanese, and Korean Pokémon cards. Some visible differences are on the borders of the cards, with Japanese cards having silver edges and others having them in different colors. Korean cards also have better cuts on edges and cannot fray as easily as some others might. 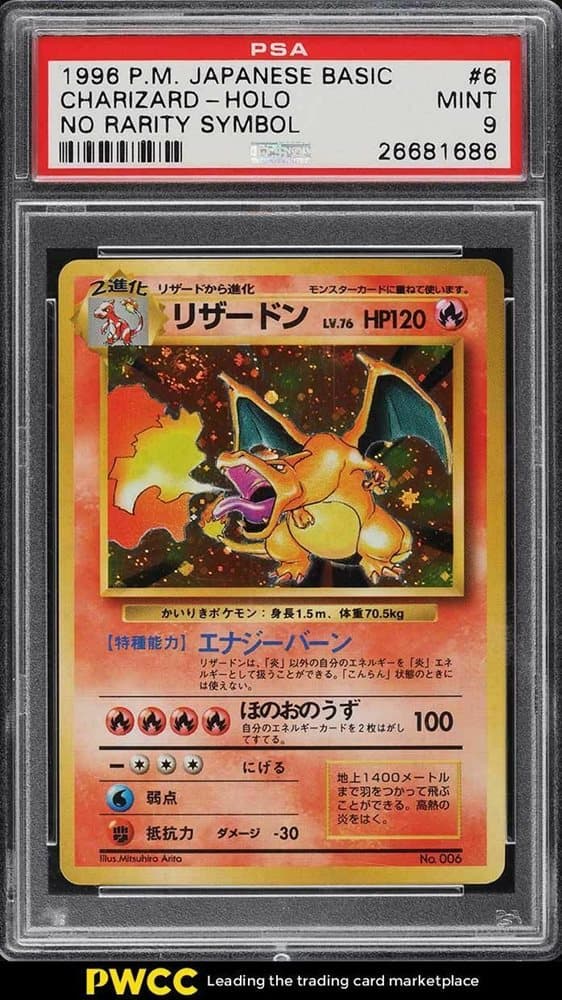 This 2nd Charizard card series ever printed is missing those numbers, as it has No.006 instead. Not known if this was a mistake on purpose, but one of those rare cards sold for $45,000 at an auction by PWCC Auctions in 2021, with PSA Grade 9 Mint grading having some minor flaws. 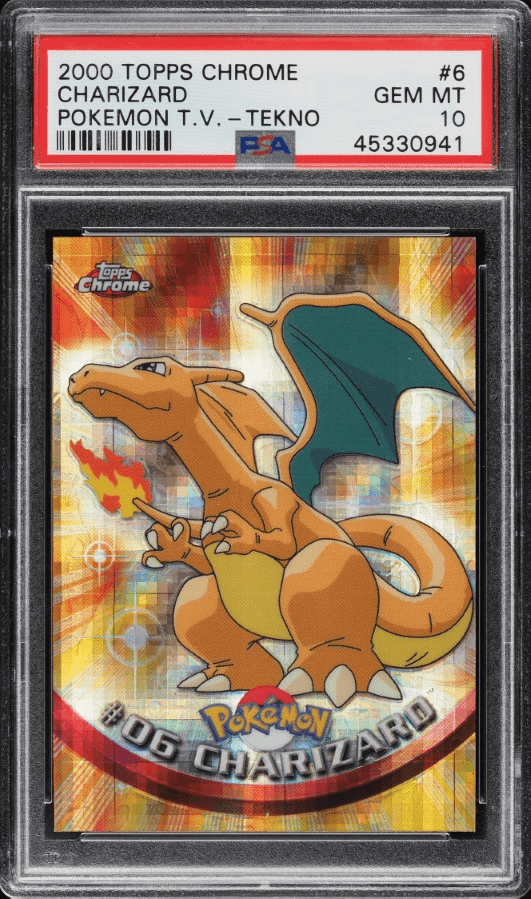 Pokémon Chrome Trading Card Series was a set of trading cards produced by Topps in 2000, following the massive success of the game. With no detailed number of the Charizard cards produced in this series, the series consists of 78 cards with 78 of the first Pokémon characters.

One of those Charizard cards is graded 10 GEM Mint condition by PSA and was sold for $60,000 at an auction by PWCC Auctions in 2022. Pokémon cards from these series were sold randomly, usually in packs of five cards.

The most expensive Topps card ever sold is a Mickey Mantle baseball card, selling for $5.2 million in 2021. The card is one of the most valuable Mint condition grades that PSA has ever graded. 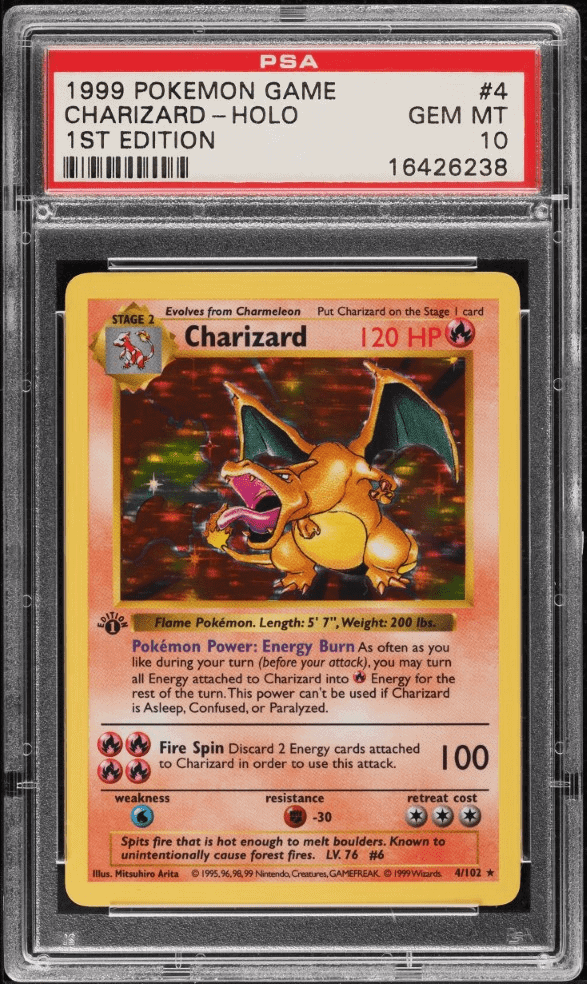 Out of 3,500 copies submitted to PSA for grading, only 121 Pokémon cards received PSA 10 Mint grading for their perfect features. This Shadowless card holds a great value due to being printed in 1999 as a part of the 1st Edition production, as later prints added a drop shadow to the Charizard in the picture.

Marketed as only 102 printed cards, the most valuable sold for $264,000 at an auction by PWCC Auctions in 2022. There wasn’t a specific reason why they marketed the series with only 102 produced cards, but usually, that is what the cards have written in the bottom right corner.

One of the most valuable Shadowless Charizard cards from the 1st Edition sold to rapper Logic for $220,000 in 2020. Truly collectible memorabilia. 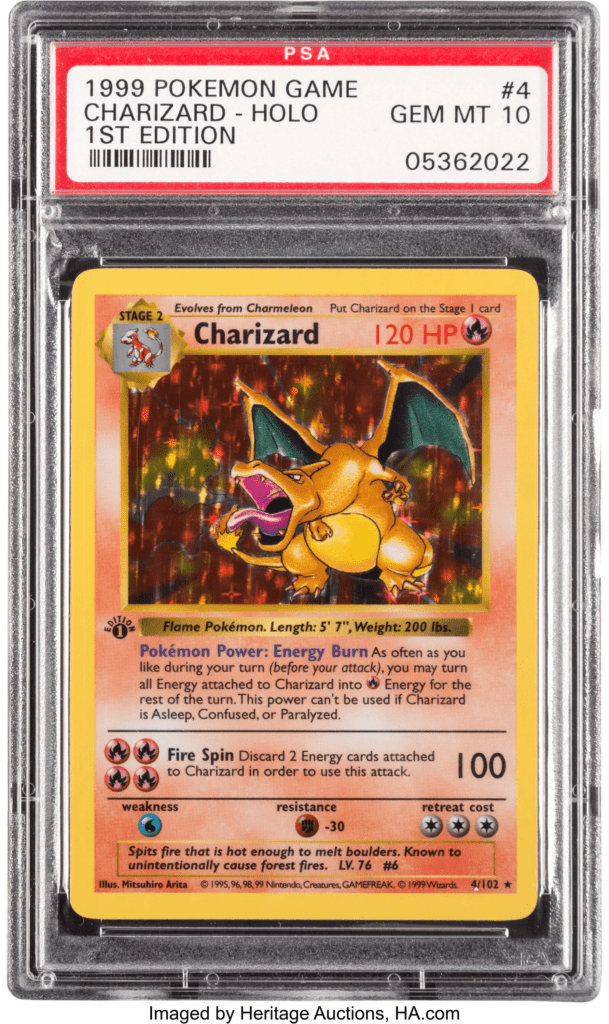 A rare 1st Edition Base Set Trading Card is one of the most expensive Pokémon cards ever sold. This Charizard card is graded as a virtually perfect card with four sharp corners, a sharp focus of the pictures, and an original gloss over the card by the PSA grading system.

The Charizard card by Wizards of the Coast sold for $336,000 at an auction by Heritage Auction House in 2022. The first edition holds a special sentiment since it followed the success of the animated series in 1997, starting one of the most successful franchises of today.

Charizard, also known as Lizardon in Japan, first appeared in the video game Pokémon Red and Blue in 1996. As one of the more popular characters among collectors, cards in mint conditions have a great value on auctions worldwide. 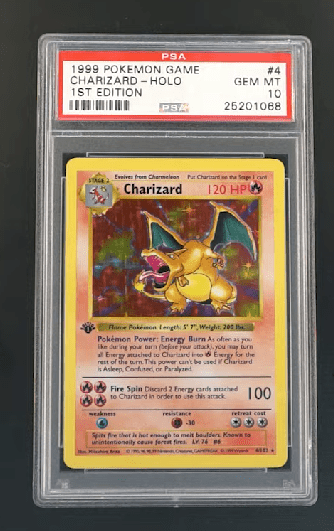 Another 1st Edition Charizard Card on this list. This Shadowless is one of the rarest Pokémon cards out there, with the production of originally only 16 holographic cards. The card is graded to be in mint condition, with PSA 10 GEM grading.

First edition Charizard cards are considered a “holy grail” of trading card games, but holographic production was rarer, hence the estimated prices. One of those sold for $420,000 at an auction by PWCC Auctions in 2022. The third-highest price for any Pokémon card.

The holographic Charizard card was designed by Mitsuhiro Arita, a celebrated illustrator of Pokémon cards, present since their first print.

1. Topsun Charizard Blue Back No Number

Estimated Value: $493,230
Estimated Number of Copies: Around 50
Reason for Rarity: No number on the card error, Mint condition
Year Released: 1995 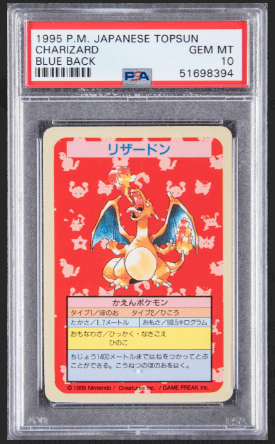 This sought-after Charizard Pokémon card is among the rarest and most valuable Pokémon cards today. Blue Back Topsun cards hold their value more than the other colors, but this one has a printing error, missing several the card in the top right corner. The reason for the misprint is not known.

Even with the trademarked year being 1995, this series was distributed in 1997 instead. One of those misprints sold for $493,230 at an auction by Goldin Auctions in 2021. There are around 150 printed numbered cards, but for some reason, about 50 were printed without the number.

No Number Charizard card is the only Topsun card with this misprint, graded Mint condition 10 by PSA, making this purchase one of a kind for collectors.