Kingdom Animalia contains large number of animals with various form and size. But there are certain fundamental features common to all the animals. Classification of Kingdom Animalia is based upon these fundamental characteristics, which include arrangement of cells, body plan, body symmetry, nature of coelom, body segmentation, and patterns of digestive, circulatory, reproductive and development systems. 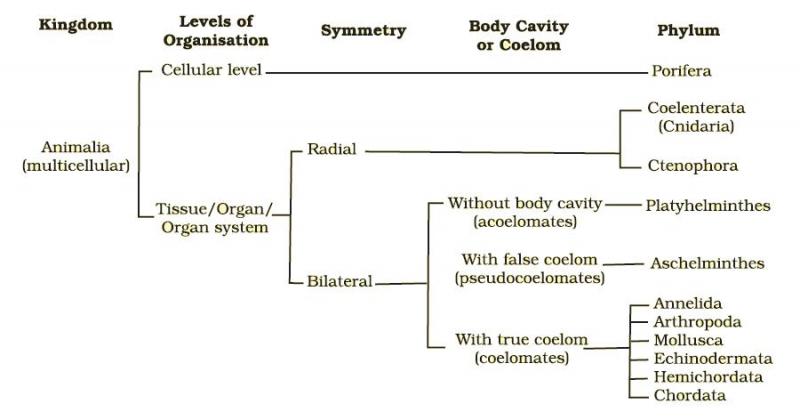 All members of Kingdom Animalia are multicellular. But the arrangement of cells within the body differs in each group. Four patterns of cellular organization are observed in animals. 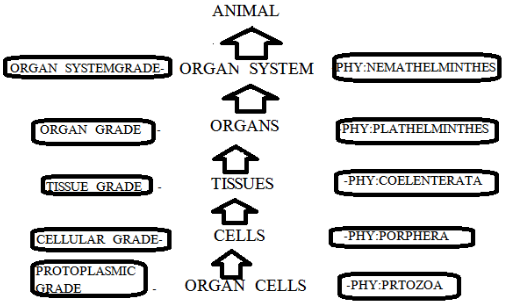 External body of an animal can be symmetrical or asymmetrical.

Asymmetrical animals cannot be divided into equal halves along any plane of division. Upon division, they form dissimilar halves. Eg: Sponges.

Symmetrical animals can be divided into two equal halves. 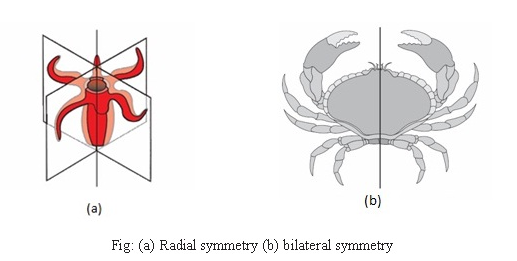 Another basic feature of animals is the presence of two or more germ layers in the developing embryo.

Diploblastic organisms have two germ layers in the embryo – an internal endoderm and an external ectoderm. An undifferentiated layer called mesoglea is present between these layers. Eg: Coelenterates.

Triploblastic organisms have three germ layers in the embryo. A third layer called mesoderm is present between the internal endoderm and the external ectoderm.

Eg: All higher animals from Platyhelminthes to Chordates. 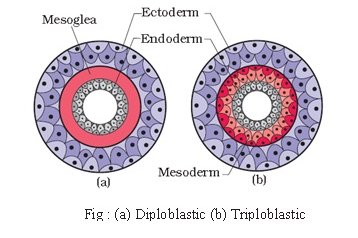 True coelom refers to the body cavity present between the body wall and the gut wall. It is formed by the splitting of mesoderm during embryonic development, and hence it is lined by mesodermal cells. All body organs are found within the coelom. Animals can be classified on the basis of presence or absence of this coelom.

Ascoelomates: Animals which do not possess coelom are called ascoelomates. Eg: Platyhelminthes.

Pseudocoelomates: In some animals, the coelom is interrupted by endodermal cells of alimentary canal. Hence, the coelom appears as small pouches and are found scattered between the ectoderm and endoderm. Such a coelom is called a pseudocoelom.

Body is unsegmented in animals like sponges, coelenterates and aschelminthes. In other animals, the body is divided internally and externally into segments. Sometimes, there will be a serial repetition of some organs.

The segmentation is called non–metameric when the new segments are added from the anterior end, and each segment is independent. Eg: Tapeworm.

In metameric segmentation, the segments are inter-dependent and new segments are added from the posterior end. Eg: Earthworm.

Different variations are found during the embryonic development of an embryo. Animals are classified based on these variations.

Development of the embryo:

The most important feature of animals is the presence or absence of a distinct notochord. It is a rod-shaped structure derived from mesoderm. It is found on the dorsal side of the animal.

Animals with notochord are called chordates.

Animals without notochord are called non–chordates.