Biologically, the population is comprised of all organisms of the same species that live in a particular geographical area with the ability of interbreeding amongst themselves.

The sexual population is the region where interbreeding is possible between any given pair in that area whereby interbreeding has a higher probability than crossbreeding with organisms from other regions.

Sociologically, the population is the collection of humans. The science which entails the statistical study of the human population is known as Demography. Census is the process through whichthe population is determined by analyzing, compiling, and publishing data.

Population density is defined as the total number of people per square kilometer.

This is a given set of living things in which any pair of members can interbreed. Therefore, the organisms can have regular gamete exchange to produce viable offspring. Such a group is referred to as a Gamo deme.

A panmictic is a large Gamo deme whereby all genes alleles (gametes) are distributed uniformly by the gametes within. Therefore alleles are frequently converted to genotype frequencies through expanding a specific quadratic equation used in quantitative genetics.

The rare occurrence in nature where localization of gamete exchange happens through preferential mating, cataclysm, and dispersal limitations; leads to a reasonable and uniform exchange of Gamo demes within themselves with a virtual separation from there close Gamo demes. This virtual distance may lead to low frequencies of genes in a given population, thereby leading to the breaking up of a larger population into a small overlapping sexual population, a failure which causes:

The total world population was about 7.55 billion in 2019, according to the United States Census Bureau. In 2012, the 7 billion marks were passed. There is a considerable error in these figures; for instance, the population of Nigeria is not known to the nearest millions.

Research done by Carl Haub calculated a total of 100 billion people had been born in the last 2000 years. 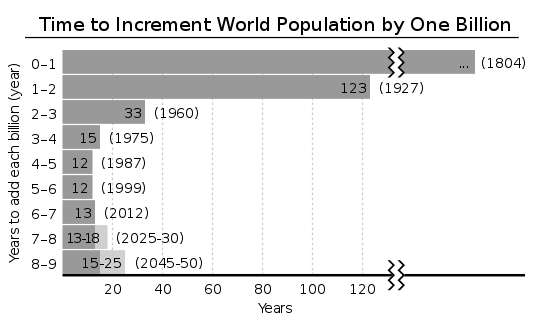 This increased significantly during the Industrial Revolution from 1700 onwards. There has been a steady increase in population growth in the last 50 years due to medical advances and agricultural productivity improvements.

It is predicted that the world’s population will be about 9.8 billion in 2050 and 11.2 billion in 2100. It is, therefore, important that the human population is controlled.