The modern synthetic theory is based on the genetic changes in the populations, which causes the formation of the new species. It also explains the Mendelian population or the genetic population, gene frequency, and the gene pool. The concepts which come under the synthetic theory of evolution are geographical and reproductive isolation, natural selection, and genetic variations. This theory describes the merging of Mendelian genetics with Darwin’s theory, thus resulting in a unified theory of evolution. It is also referred to as the Neo-Darwinian theory. 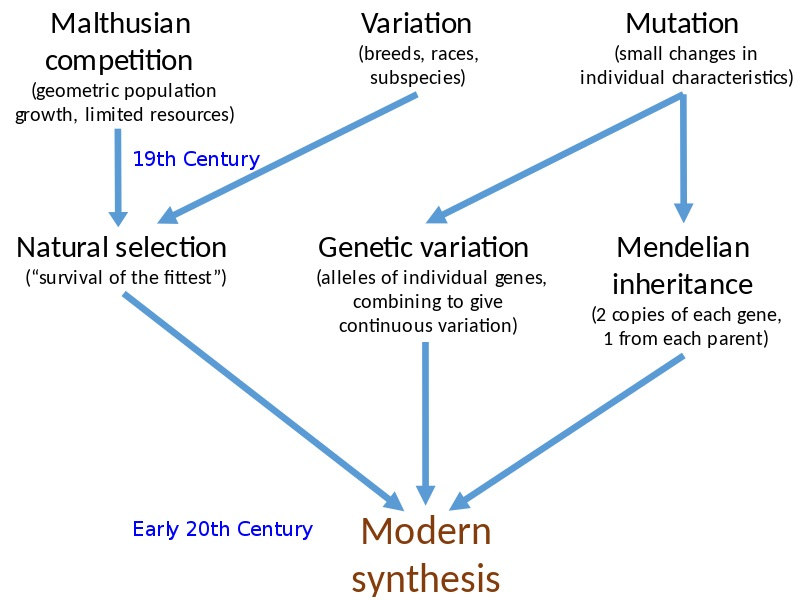 Several changes are shown by this theory, that how the processes of evolution and evolution are conceived. A new definition was given to the evolution by this theory stated as the changes which occur in the allele frequencies within the populations. This theory has a strong emphasis on the genetics of evolution. It includes scientific evidence from genetics, as the concepts are explained about the allele frequency of the population genetics. This theory says that when the changes are great enough, it causes the formation of the new species.

Factors of the Modern Synthetic Theory of Evolution

Some of the factors that describe the modern theory of synthetic evolution are stated below.

Mutation: The changes which occur in the genes due to the differential phenotypic effect are known mutations. These changes may be harmful and they cause great variation in the offspring.

Heredity: The primary mechanism in the evolution is a transmission that occurs due to the variations from the parents to the offspring. The hereditary properties favor the organisms for their struggle for existence.

Natural Selection: By the natural selection a change is produced in the frequency of the genes from one generation to the another, by favoring the differential forms of reproduction. The process of natural selection creates an adaptive relationship between the populations and the environment by various combinations of the genes.

Isolation: It is one of the significant factors that are responsible for the synthetic theory of evolution. Isolation greatly helps to prevent the interbreeding of the related organisms.