Probability: probability of ‘not’, ‘and’ and ‘or’ events

General addition rule applies to any additional events. You can use it for both disjoint events and non-disjoint events where two events are mutually exclusive. This means that if 1 event is true, the other must be false. Therefore, P(A and B), i.e. the probability of both the events to occur and be true will always equal 0. 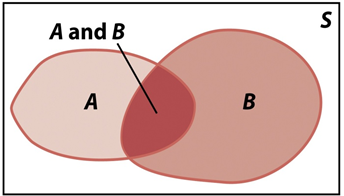 What is the probability of randomly picking out an ace or a heart from a deck of 52 playing cards?

Answer: There are 4 aces in the deck and 13 cards of hearts. However, 1 card has both ace and heart on it. Add the two quantities separately we would end up counting that same card twice. Therefore, we need to used the addition rule to avoid counting cards double.

Therefore, we need to subtract those overlaps with one disjoint event.

In some cases, the occurrence of one event has no effect on the outcome of another. These events are called independent. For example, rolling an unbiased dice or tossing a coin is an independent event. Mathematically, A and B are independent if P(A|B) = P(A)

If A and B are mutually exclusive events, then the probability that at least one of the two (equivalent to one or the other or both) will happen is P(AUB) = P(A) + P(B)