When we deal with the atoms, molecules and formula units which are extremely small, far, far smaller than grains of sugar. Counting atoms or molecules is not only unwise, it is absolutely impossible. One drop of water contains about 1022 molecules of water. If you counted 10 molecules very second for 50 years without stopping you would have counted only 1.6×1010 molecules. Put another way, at that counting rate, it would take you over 30 trillion years to count the water molecules in one tiny drop The concept of Avogadro’s number facilitated the counting of particles contained in given mass of a substance. Avogadro’s number is a collection of 6.02 x 10²³ particles. It is mostly presented by the symbol ‘NA’ or ‘L’. Hence the 6.02 x 10²³ number of atoms, molecules or formula units in a substance is called Avogadro’s number that is equivalent to one ‘mole’ of respective substance. In simple words 6.02 x 10²³ particles are equal to one mole as twelve eggs are equal to one dozen. 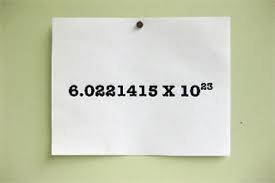 Avogadro’s number is extremely important for the understanding of the makeup of molecules and their interactions and combinations.

There’s one more property of Avogadro’s number is that substance’s molecular weight is equal to the mass of one mole form a substance.

The initial accurate method to calculate value of Avogadro constant was founded on coulometer. The standard is to calculate the Faraday constant F, by elementary charge e.  NA = F/e.