Electrostatic potential at any point of an electric field is defined as potential energy per unit charge at that point.

Charge $q$ is fixed at point $P$ and is displaced from point R to S along a radial line PRS shown in the figure.

According to Coulomb’s law, the magnitude of the force on a positive test charge as is given by,

If q’ moves towards $S$ through a small displacement $dr$ then work done by this force is given by,

It shows that work done on the test charge depends on end points not on the path taken.

It is a scalar quantity and its SI unit is Volt.

Now dividing both sides of the above equation by $q^{‘}$, we get,

If point $S$ is situated at infinity then,

(as Potential energy at infinity is zero)

Therefore, the electric potential at a point in an electric field is the ratio of work done in bringing a test charge from infinity to that point to the magnitude of the test charge.

Potential due to point charge:

We have electric potential at a point due to a test charge $+q$,

Potential $V$ at any point due to all the point charges in a given system is given by,

For continuous charge distribution, the above equation becomes,

Let us consider a diagram showing the electric field $E$ due to a point charge $+q$ at point $O in a radially outward direction.

The quantity $\frac{dV}{dr}$ is the rate of change of potential with distance. This is known as potential gradient.

Negative sign indicates that the potential drops with increasing distance.

A graph of potential gradient and electric field intensity for a radial field is shown below. 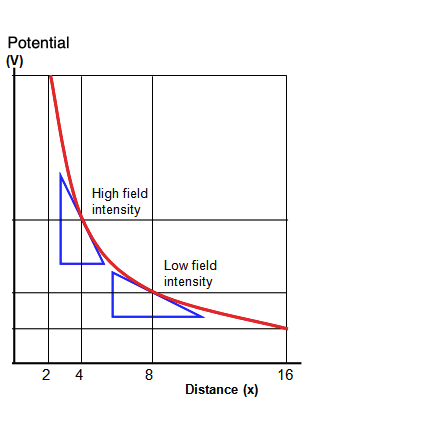