Frictional force arises whenever two surfaces of two bodies come in contact with each other.

The frictional force is an example of a contact force. The magnitude of the contact forces on two bodies is equal opposite in direction.

Suppose, a block is kept on a horizontal surface.

Let $F_{c}$ is the contact force both the bodies exert on each other.

Static friction comes into play when the bodies at rest.

For example, a heavy block resting on a surface cannot be moved easily until the magnitude of the applied force is increased. The force of static friction must be overcome by the applied force before the body at rest begins to move or slide.

The maximum value of static friction between the two surfaces in contact is known as limiting friction $f_{ms}$.

This limiting friction is proportional to the normal contact force (N) between the bodies.

$\mu _{s}$ depends on the material and roughness of the surfaces of bodies in contact.

When the applied force becomes greater than limiting frictional force, then the body starts to move and kinetic friction comes into existence.

When the block is sliding over the surface each, the body exerts a frictional force on the other side parallel to the surface in contact

Consider a block of mass $m$ resting on a horizontal surface.

The block’s weight $W=mg$ is balanced by the normal force $N$. 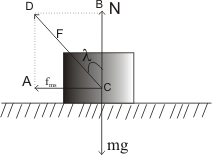 Therefore, the coefficient of static friction is equal to the tangent of the angle of friction.

The angle which an inclined plane makes with the horizontal so that a body placed over it just begins to slide. 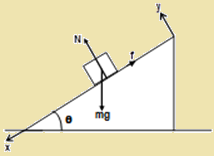 Consider a body of mass resting on an inclined plane of inclination $\theta $. Obviously, If friction is large enough, the body will not slide down.