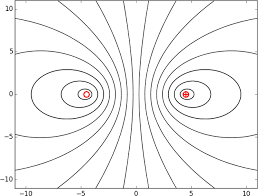 The field lines have some powerful properties which describe that

Firstly, we make a simple electric circuit by joining the straight line with a battery and a plug. Take a magnetic compass needle put to the wire straight parallel to and over the needle. The switch is connected to shoe the flow of current parallel to south and north directions.