with a positive number n gives a vector

) whose magnitude is changed by the factor n, but the direction is same as that

with a negative number n gives a vector

and its magnitude is – n times

An example is given:

Diagram (a): Multiplication by a positive number

Diagram (b): Multiplication by a negative number 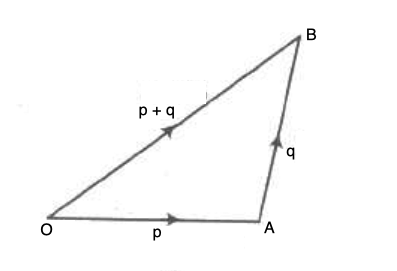 From the above diagram, we get,

Now, the above diagram can be expressed as below: 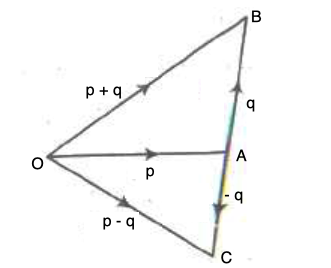 The direction of vector b is reversed and then the vector addition process is followed.

Then, it can be written as,

Parallelogram law: If two vectors P and Q are represented by two adjacent sides of a parallelogram both pointing outwards, then the diagonal of the parallelogram represents the resultant of P and Q. 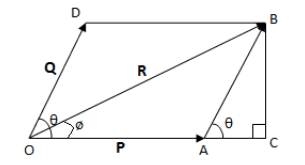 From the diagram, we get,

BC is normal to OC.

From the geometry of the diagram,

The direction of the resultant vector R from vector A is given by,

Equation (2) and (3) give the magnitude and direction of the resultant vector respectively.

When a zero vector is added or subtracted from a vector, then the result is the vector itself in each case.

If any two nonzero vectors

are in a plane with different directions and

be another vector in the same plane, then

can be expressed as a sum of two vectors – one multiplying

has been resolved into two component vectors i.e.

vector lies in XY plane such that,

, where are unit vectors along the X and Y – axis 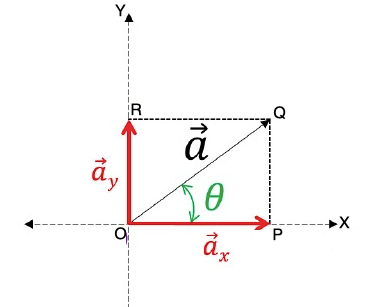 The scalar product or dot product of any two vectors

The dot product is equal to the product of their magnitudes with cosine of angle between them.

Scalar product will be maximum when $\cos \theta $= 1, so, vectors are parallel.

Similarly, the component of

The vector product or cross product of any two vectors

It is defined as

Where $\theta $ is the angle between

and ${n}$ is the unit whose direction is given by the right-hand thumb rule. 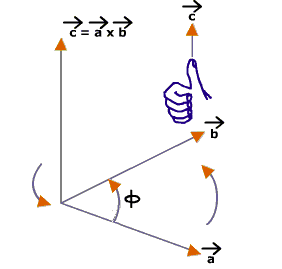 Stretch your right palm and pace perpendicular to the plane of

in such a way that the finger is along the vector

The vector product of two vectors is always a vector perpendicular to the plane containing the two vectors.