Let us consider a system, in which a charge $Q$ is placed at the origin and another charge $q$ is placed at a point P. There will be some force of attraction or repulsion between two charges. Now if charge q is removed from the system, there are two possibilities.

An electric field exists at a point if an electrical force is exerted on a stationary charged object placed at that point.

Let us consider a point P from where a charge $Q$is placed at a distance $r$. If a point charge or test charge $q$is placed at P, then Coulomb’s force is given by,

If the position of charge $q$ is expressed by the vector ${r}$, it experiences a force $F$ equal to the

charge $q$ multiplied by the electric field $E$ at the location of $q.$

Direction of the electric field in case of unit positive charge is shown below.

Electric field due to multiple charges:

Electric field at a point in space due to the system of charges is defined as the force experienced by a unit test charge placed at that point, without disturbing the original positions of charges $q_{1}$, $q_{2}$……..$q_{n}$

We can use Coulomb’s law and the superposition principle to determine this field at a point P denoted by position vector r. 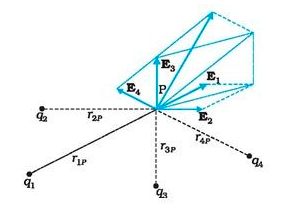 By using the principle of superposition, the resultant electric field E will be the vector sum of all the individual electric fields. 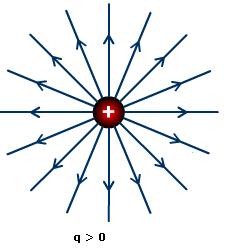 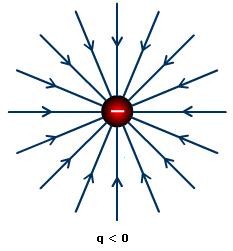 2. Electric field lines around a system of two positive charges describe the mutual repulsion between them shown below.

3. Electric field lines around a system of one positive charge and another negative charge describe the mutual attraction between them shown below.