Group 15 elements exhibit variant physical properties due to their valence shell electron configuration with completely filled s orbital and half-filled p orbital. Nitrogen is a diatomic gas and the rest of the elements are solid in nature. Nitrogen and phosphorous are non-metal in nature while Arsenic and Antimony are metalloids. Bismuth is the heaviest no radioactive metal in the periodic table. Likewise, as we go down the group the density of the element increases.

All the group 15 elements except bismuth exhibit allotropy where these elements contain different physical states of their elemental structure. Nitrogen has two allotropes: alpha and beta. Phosphorous is found as white, red and black phosphorus. Arsenic exists as black grey and yellow allotropic structure. Antimony also has three allotropes: yellow, metallic and explosive.

As we go down the group, the main energy level also increases as new orbital are added with increasing atomic number. The valence electrons move further away from the nucleus making the atomic radii to increase. The covalent radius increases drastically from nitrogen to phosphorous. However, from arsenic to bismuth only a small increase in ionic radius is noticed. This happens because of the presence of completely filled d-orbital and f-orbital in the heavier element. 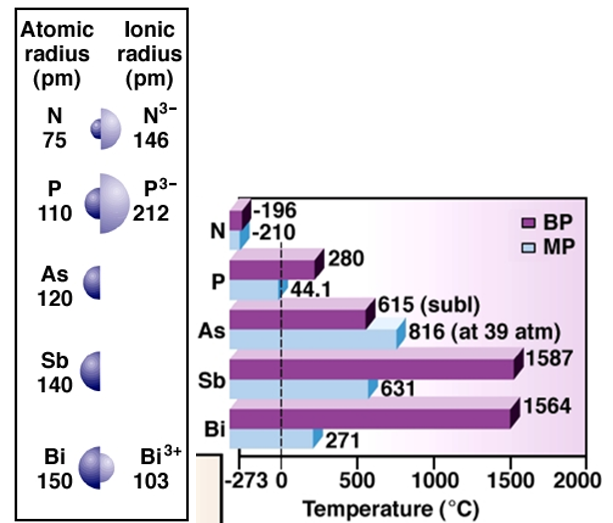 With increasing nuclear size, the m.p and b.p also increase. Also, nitrogen has a very low melting and boiling point because it occurs as a diatomic gas with two atoms bonded together in a triple bond. The diatomic particles stay away from each other and because of their discrete nature, the intermolecular space is more. Note that, the melting point increases from nitrogen to arsenic and then it starts decreasing. This happens because even though these elements have a layered structure, due to valence electrons further away from the nucleus, the particles can freely press into each other. Also, the boiling point of bismuth is not more than antimony because of the loose packing of atoms in a metallic bond.

Ionization energy shows how hard the nucleus is holding onto its outer most electrons while electronegativity shows the effectiveness of the shielding effect of the nucleus on the valence shell. In comparison to group 14 elements, the group 15 elements demonstrate higher ionization values because of stable valence shell structure with completely filled s-orbital and half filled p-orbital. The atomic radius increases down the group and the valence electrons move further away from the nucleus. This makes the first ionization enthalpy to decrease down the group. For the same reason of the shielding effect and increasing nuclear size, the electronegativity also decreases.

All the elements in group 15 form trihydrides with sp3 hybridization. The stability of the hydrides reduces down the group as the bond dissociation energy decreases. The boiling point of ammonia is more than the hydrides of phosphorous and arsenic owing to its hydrogen bonds. With other elements, the van der Waals forces increase the boiling point as the bond angle decreases.

All group 15 elements also for trioxides and pentaoxides. As we go down the group, the acidic character of these oxides decrease and the basic character increases. Trihalides become more ionic down the group as they contain sp3 hybridization and pyramidal shape. Pentahalides form Lewis acids due to the presence of vacant d orbitals. Also, all group 15 elements react with other metals to form binary compounds with -3 oxidation state.