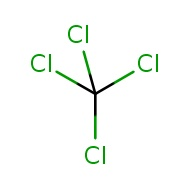 Tetrachloromethane is toxic material and its use is highly suppressed even though it has a wide range of applications. Tetrachloromethane is a greenhouse gas and it depletes the ozone and has a significant role to cause environmental damage and global warming. It is a volatile organic compound but it does not react so it does not have any contribution to the formation of ground-level ozone. It tetrachloromethane is spilled on the soil then it is rapidly evaporated although some amount is leached to the groundwater and causes the contamination. Tetrachloromethane is extremely stable in the lower atmosphere with a residence time of up to 30-50 years and it causes the ozone depletion. Due to its chemical stability, it can reach the upper atmosphere and, in the stratosphere, there is intense ultraviolet radiation which causes its break down to the chlorine. Then upon reaction with ozone, this chlorine causes the depletion of the ozone layer which protects the life from the harmful ultraviolet radiation. It is a weak greenhouse gas and significantly contributes to global warming.